The Notion, Definition, and Kinds of Justice in Political Philosophy 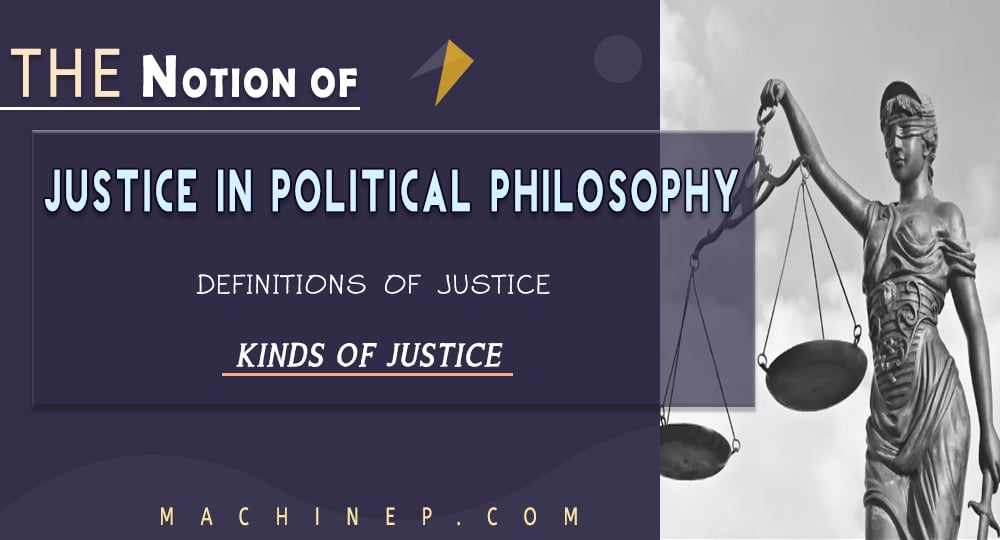 The issue of justice is perennial. In fact, it is as old as the existence of man as far as his relationship with one another is concerned.  Moreover, it is a controversial issue, and so, different thinkers of different philosophical epochs have given it nuances of interpretations and definitions.

The Etymology of Justice

Etymologically, justice is derived from the Latin word “Justicia” which means fairness or righteousness. According to Bourke, “It is evident that the term justice can be dependent on the shorter Latin word ‘jus’ which means right”.

The Notion and Concept of Justice

However, the origin of justice is traceable to the nature of man. Naturally, man is insatiable in his wants but highly limited in the means of satisfying these wants. Now, this state of lack and the effort to fill it up with his wants, make him a curious and voracious being. In the course of pursuing the means to satisfying his wants, he infringes on the rights of others. It is this state that has resulted in slavery, war, abortion, and all kinds of man’s inhumanity to man which is prevalent in contemporary society.

Nevertheless, as a rational being, man would not wish to remain in a chaotic state.  So, in other to maintain peace and order in society, there is a need to determine the limits of every man in proportion to his status in life, by means of legislation.  These limits so mapped out, give each man his own rights, duties, etc. Therefore, “Justice presupposes people pressing claims or justifying them by rules or standards”.

It is essential to note that justice does not deal with privileges or sentiments as such rather it deals with rights-binding by both civil and natural law. For instance, the gift of alms is not a right but a mere privilege.

Different philosophers in the past have grappled with the issue of justice in view of giving it a concise definition.

Plato, in one of his dialogues, The Republic, tried in a dialectical manner to give a philosophical definition of justice. Thrasymachus, a character in the book, defined justice as obeying the will of the stronger. According to him: “I declare that justice is nothing else than that which is advantageous to the stronger”.

By the stronger, he meant those who are able to make and enforce laws in the ways that suit their ego. Furthering this stand he continued, “In every city, justice is the same.  It is what is advantageous to the established government”. Without much ado, Thrasymachus then arrived at the conclusion that the decision of the stronger is just.  However, it should be noted that he was talking in reference to the political realism of his time.

Here the Greeks regard themselves as the rulers and there is the distinction between the noble class and the slave.  The slave is inferior to his master both intellectually and otherwise.  And as such, they (slaves) have no sense of justice.  So any dictate coming from the master automatically becomes what is just.

Aristotle treats justice in book five of his Ethics and applies it in his political philosophy.  For him, justice would be seen from the universal point of view. Universal justice extends through the life of the people and enforces virtue which leads to the fulfillment of the goal of the state.  The application of universal justice stems from what is lawful.  Aristotle has the ingenuity of associating justice with law.

This notion of justice as the will of the stronger has reared its ugly head into the arena of modern and contemporary political theories.  This is evident in the “philosophy of might is right” propounded by Machiavelli. For any state worth the name to exist, justice must have its place in its administrative structure.

For Aquinas, justice is one of the cardinal virtues of man.  He defines it as that virtue that resides in the will.  Therefore, justice is: “…a habit whereby a man renders to one, ones due by a constant and perpetual will”.

Looking critically at the above notion of justice, one cannot help asking such a simple question as since justice consists in giving everyone his dues, can one be justified, if one gives what is harmful or detrimental to its owner?

Therefore, justice is not a mere irrational habit; it should involve every amount of rationality and prudence, which should guide the will of man that naturally seeks the good.  This good is mainly for order in the society.

There are different kinds of justice existing in the state. Essentially, they all have the same purpose which is the fair distribution of duties with the end to achieving a common good.

Social justice is the justice that deals with the duties and responsibilities of the individual towards the state.  It is often called “Legal Justice” in certain places.  Social justice looks forward to the common good of all in the state.  If it should pursue any particular good, it does so with a view to achieving a better goal for all.

In social justice, the individual thinks of what he/she can do for the progress of the state. It refers to the organization of society in such a way that the common good to which all are expected to contribute in proportion to their ability and opportunity is available to all the members for their ready use and enjoyment.

It concerns all that is connected with being a good citizen or a good member of the society and getting what one ought to get as one’s proper share of the benefits of social living; that is, as the reward of his/her good and cooperative conduct in the society.  Social justice is violated whenever a society is organized in such a way that it excludes or denies certain classes or groups within it from getting their fair share of the common good.

The commutative justice deals with the interchanging of goods such as in contract.  It exists between one person and another or between groups acting as if they were private persons negotiating on equal terms.

Commutative justice is realized by establishing a certain arithmetical equality between the values of things that people need. The interaction which commutative justice directs is not between physical persons but also between rational and moral persons.

In this kind of justice, each man acts under the subjection to the tribunal of his conscience under the guidance of law.  Sincerity and honesty are highly inevitable so much so that even if one, for instance, has the opportunity to cheat the other without being noticed, he ceases from doing so in respect of sincerity.

This justice is also a virtue that regulates the dealing of private individuals as moral persons, whereby the objective rightness is to be determined by the simple equality of whatever is exchanged and where no attention is to be paid to the possible inequality of persons involved.  So whatever exchange is made among the members of a society, objective rightness must be considered and fostered.