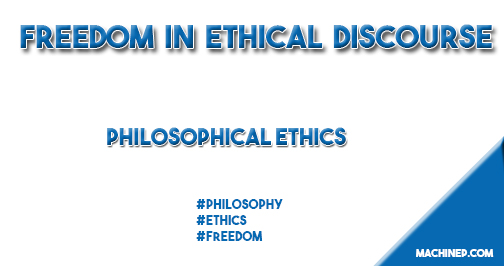 Freedom is as old as the existence of man. It is a general term used in everyday activity mostly to express how free one is in his or her actions. But, freedom in ethical discourse cuts across critical and rational discussions alongside many disciplines. This is because, no matter how free man is, everywhere seems to be in chains – Jean-Jacques Rousseau.

Freedom comes with personal consciousness to choose to act freely in a certain way rather than the other. Thus, freedom in ethical discourse comes with choice and free will. Hence, one is free to choose or not to choose. But, do you know that “even when one chooses not to choose, he/she ends up making a choice (choosing)”?

The Concept of Freedom in Philosophy

Freedom is referred to as “self-evident truth” and it is upon this axiomatic assumption that laws are laid down in human Communities, decisions taken and judgment are passed.

In the history of philosophy and social thought, freedom has a specific use as a moral and a social concept. Generally, it refers either to circumstances which arise in the relations of the world today.

Freedom is likened to be in relation with Right; when one says ‘it is my right to make speeches that please me’, and when one position that ‘I have Freedom of Speech’. In the course of this discourse, the concept of freedom will be clarified and its (freedom) essences make known as coherent as possible. Let’s discuss the different definitions of Freedom.

The various meaning of the term “freedom” centers around three major themes.

Freedom is the faculty which man enjoys in determining himself to an action and to bring its cause, after haven taken consciousness of the considerations that such an action carries for life. Man is a free being within and without, beneath and above.

Freedom is man’s true self without which he ceases to be what he is, a being unto God, the image of the creator, the matter of the universe of creations, the dynamic being. For a man to achieve greatness as desired by God, the creator, man has to be free.

Freedom according to Baptista Mundin is “another great window for looking into the mystery of man.” With freedom, man is not only simply the master of his own acts but also of himself. He is the master of his own becoming, more precisely, of that which he will become, an honest citizen, a laborious worker, a generous woman, an Ernest mother.

Freedom implies the dignity, the excellence and nobility of the human person, without which life for the individual is altered and for the society, a total chaos and the general state of anarchy. Man’s freedom is not only a quality describing an aspect of his life but the dynamics of his being, a power giving direction and meaning to the very value that man holds the most desirable life.

There are two types of freedom. They are as follows;

Note: There are many other types of freedom according to different categories. But, we shall be discussing the two mentioned above.

Freedom of exercise is that between contradictory alternatives; it is the freedom of an agent to act or not to act in an absolute sense. In any given situation, a man who is rational can will to act or will not to act. Man has this sort of freedom as a voluntary agent always, and here, freedom relates to the interior act of willing or not willing by the moral agent. The voluntary act and the free act, for all practical purposes, are identical.

The free act as a choice, therefore, is concerned with means properly, not with ends as ends. To will an end as an end is not a matter of choice but a matter of simple willing; an act of the will which centers precisely on the means is the act of choice. When reference is made to human freedom in a moral context, it is usually this freedom of specification that is meant.

Many philosophers have contributed to the definition of the term “freedom” from the ancient era of philosophy.

Kinds or Forms of Freedom

This is a man’s freedom from external constraint; that is freedom from all kinds and forms of oppressive force against man’s choice and voluntariness. This physical freedom is the immunity from physical constriction.

This is the absence of constriction through oppressive force of moral order such as reward, punishments, laws, and threats; it is the power to choose and to determine oneself. However, man’s freedom is the freedom of choice of moral goodness, to choose the good and to avoid evil. Meanwhile, the fear of the aftermaths of man’s action makes him act in an opposite direction, he acts for good to receive reward and praise, but if he acts contrary to the good, he receives punishments.

Psychological freedom is man’s capacity to choose to do anything when all the necessary conditions for acting are present. It is the sovereign control over the situation by which the will holds in its hands the power to make the choice fall in favour of one of the various alternative possibilities.

Psychological freedom, therefore, is the absence of pressure on the part of other human activities on our will, intellect or passion to perform acts in a determined way “man is a social being, open to values and communication with others and as such to be free from social influence and is, therefore, to be psychologically free.

This is the freedom from social determinism; it is the freedom of socialization and the absorption of the growth of the functions of groups, associations, and institutions having religious, social, economic, cultural, professional and political ends which operates for the good of the states.

The examination of the various kinds of freedom, clarifies to some extent what we mean by the term freedom, as that faculty which man enjoys determining himself to an action and to being its cause and author. Form the ongoing; we can see that freedom touches every aspect of man’s life. In this vein, Mundin says that freedom is “an unequivocal sign of man’s physical and spiritual dimension.”

The Essence of Freedom

The proof of the existence of freedom is necessary, in the sense of its validity beyond experience or any philosophical and scientific claims against its existence. The essence of freedom elucidates the need of man having or obtaining freedom. It explains the importance of freedom to man.

Firstly, freedom enables man to choose on which actions or activities to follow. This act of choice is one of the attributes of a human being. This is because one of the reasons for man’s rationality is to be able to dictate the good and the bad and having the right or freedom to make a choice. This, therefore, explains man as not being a total determined being.

METAPHYSICS: Meaning, Origin, Concepts and Relevance to the Society

Secondly, freedom allows the human conformability. This is because in freedom one becomes comfortable and should be held responsible for his actions, hence the advent of the moral agent.

The comfortability here is that the moral agent is no more on determinism of something or mandatory doing something. Here, the human person exercises an act of choosing to do or not to do and at his or her own convenient time.

Thirdly, freedom enables us to participate in the human activities and on this, we exercise over fundamental human right especially in the political aspect of freedom. It also enables us to associate, socialize and interacts with other creatures in the human environment. It also puts into our consciousness, the right to choose the religion of our choice and participate in its activities.

Fourthly, freedom widens our knowledge in knowing some of our right and what is not our right in the society at large. Through this means, freedom can be said to be a form of education to human being. It is through it that we gained the opportunity of searching and researching for what will help in the skyrocketing of human being beings and its environment.

Freedom plays a significant role in the relationship between one and another. In other words, freedom is an important concept which works with consciousness and choice.

Drawing from the above explanations, one could attest that Freedom is though guided, moderated and regulated by the laws and rules set up in the society, but its essences are moreover unlimited both in ethics and other disciplines.