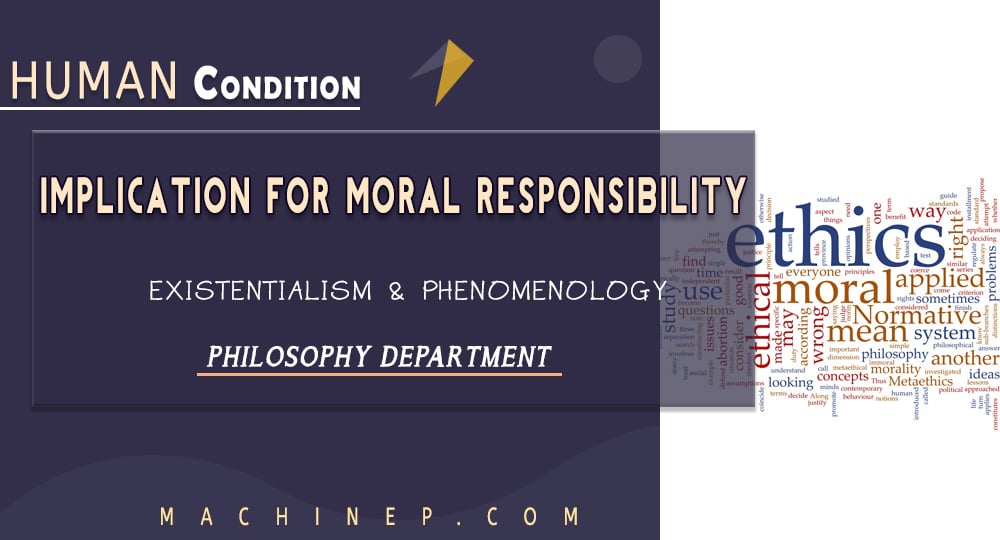 Discourse on the human condition is a very broad topic that has been and continues to be pondered and analyzed from many perspectives.  About the human conditions, one talks about the characteristics, key events, and situations that compose the essentials of human existence, such as birth, growth, emotionality, aspiration, conflict, and mortality. When we do not take the human condition to be non-philosophical, this term is typically used to show the meaning of life and moral concerns.

The palingenesis of this contemporary discourse is not only a contemporary challenge but a perennial issue. How do these conditions imply moral judgments and have their roots in the existence of man? These are pertinent questions that need to be answered.

As we see, this study again introduces the notion of moral responsibility and we cannot unite the notion of the philosophical discourse on human conditions with the issue of moral responsibility. What we should do then would be to take the term, human conditions, in its non-philosophical extension which covers the issue of moral concerns.

The problem identified here is how a man acts without concern and check about his morality when his actions are critically evaluated. If a man possesses freedom and rationality, why do not these work in synergy? Why does not rationality keep a check on freewill to remind it that it is about to perform actions that are going to be evaluated?

The universality of rationality and free will is put into question where if these are universal, why do some people act irrationally and others do the opposite? The actions which result from the laissez-a-faire attitude of man have contributed to lots of problems that are experienced in the society and to which the solution appears to not be near.

The purpose of this study, therefore, is to cause an introspection and re-introspection on the actions we carry out and make a conscious effort to remind ourselves that our end is still revolving around our human condition, which is death. Thus, we need to make a mark and make an impact before we faze out of existence.

On the significance of this study, one can identify that man will begin to tend towards producing positive results and recreating himself. Call to mind that this is an anthropological study that starts from man and ends in man and so the effect will only be seen in the attitude of man.

Man has been conceived over the ages to be many things and has got many attributes to himself. He has been seen as homo erectus, homo faber, homo religious, homo loquens, etc. and these constitute man and show the conditions which make him act the way he does.

Because man is religious, we can say and understand when he performs religious activities and so, likewise other actions. On being responsible for the actions he takes, we allude blames and praises to man for the actions done because he possesses freedom and rationality (voluntas et ratio).

These are attributes that are so concomitant with the man that any attempt to reduce any in whatever form would be dangerous and would arise to a new class of man. And that is why we have amoral beings, who cannot be blamed for the actions they take.

15 Definitions Of Philosophy By Prominent Philosophers

Although these may lay claims to being humans, we now count them off from the scope of morality because they possess neither freedom to act nor rationality.

Our responsibility is much greater than we might have supposed because it involves all mankind and by the very nature of our being man and by the possession of attributes which establish him to be able to receive blame and praise for whatever action he may take.

On morality, Zimmerman proposes that the consequences of one’s actions- even those that are actually foreseen do not add anything to the degree of worthiness of blame, over and above that accrues to her in virtue of deciding to perform a wrong action. And supporting Zimmerman’s view and defends the idea that occurrence and awareness of wrongdoing is necessary for blameworthiness.

One must then tend to say that (moral) responsibility is very closely linked with freedom and designates a person’s moral accountability for one’s actions. Liz can be responsible for an action only if it is really hers, only if its true cause is to be found in what makes Liz a subject who is capable of self-determination. Before being responsible before others, Liz is responsible before herself.

The human conditions here focus on the series of events that man has experienced and has formed him to be able to withstand the bad parts of life. Through the journey of man, he acquires attributes and tendencies that make him eligible to stand for moral judgment.

What should be done?

With the realization of man’s eligibility to stand for moral judgments because of his possession of freedom and rationality, there is a need to put each of our actions under thorough scrutiny before eventual execution so that we may not be found wanting in moral judgments. We must reflect on the consequences of our actions because there seems no escape route except answering for our actions once the deed has been done.

The human conditions we have identified in the course of this study puts man on the moral judgment road and he must be wary of his actions these conditions and attributes have established him as a moral agent who stands trial for whatever he does.