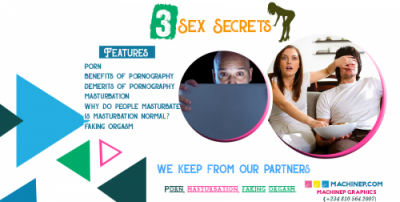 Do you know that most love partners do strange things when they are alone? Have you ever wondered if your love partner has some sex secrets he or she keeps from you? Of course, in every relationship/marriage, there is always a sex secret from both partners. But, do not be worried, this interesting article will enlighten you on 3 Sex Secrets we keep from our partners, reasons for the secrets, and as well expose you to some educating implication of the sex secrets we keep from our love partners.

Human sexuality is the way people experience and express themselves sexually. Physical and emotional aspects of sexuality include bonds between individuals that are expressed through profound feelings or physical manifestations of love, trust, and care. Sexual lives are meant to be kept secret because it is a crucial aspect of human existence most especially in contemporary society.

Various groups within society have considered depictions of a sexual nature immoral, addictive, and noxious, labeling them pornographic, and attempting to have them suppressed under obscenity laws, censored, or made illegal. Such grounds, and even the definition of pornography, have differed in various historical, cultural, and national contexts.

Just like every other stress-relieving tactic, people tend to watch pornography just to relieve stress. Life can be stressful, and from my experience, owning a stress ball does not make the complicated twists and turns any easier to deal with.

The Demerits of pornography

Faking Orgasm as a Sex Secret

Women fake orgasms more frequently than men, with one survey finding that 26 percent of women fake an orgasm every time they have sex. Other studies have found that anywhere from 25 to 74% of women admit to having faked an orgasm at some point in their lives. This is more than the 25 percent of women who report consistently having an orgasm during coitus.

Women tend to achieve orgasm during intercourse less readily than men because most women require direct clitoral stimulation to achieve orgasm and not all sexual positions provide access to the clitoris, which often makes orgasms difficult to achieve for women. For women in heterosexual relationships, faking an orgasm can also be based on deference to the man, need for his approval, or feelings of shame or sexual inadequacy.

Orgasm is not always achieved easily during sexual activity and due to this effect, some women especially make use of sex toys like orgasm Oval and Pink Duo to remedy the situation. For both sexes, the condition of being unable to orgasm during sex is called anorgasmia; it can be caused by a variety of factors, including factors in one’s life such as stress, anxiety, depression, or fatigue, as well as factors related to the sex itself; including worry, guilt, fear of painful intercourse, fear of pregnancy, the undesirability of a partner, and the undesirability of a setting. It can also be caused by drug use, including alcohol and other substances, or side effects from prescription drugs

People can fake orgasms for a number of reasons, such as when their partner wants them to orgasm but they are unable, or when they desire to stop having sex but are not comfortable telling their partner directly, avoiding negative consequences, or pleasing their partner.

So, then, dear ladies and gentlemen, feel the pleasure in the very marrow of your bones; share it fairly with your lover, say pleasant, naughty things in a while. And if Nature has withheld from you the sensation of pleasure, then teach your lips to lie and say you feel it all. Unhappy is the woman who feels no answering thrill. But, if you have to pretend, don’t betray yourself by over-acting. Let your movements and your eyes combine to deceive us, and, gasping, panting, complete the illusion.

People can also fake orgasms for reasons of display or presentation, such as during phone sex or in pornography.

Feminists have asserted that women faking orgasms is a sign of male-centered sexuality; in a society that celebrates only male sexual pleasure, women may feel pressured to engage in acts that bring their male partners to orgasm but that do not provide them physical pleasure.

From an evolutionary perspective, females might fake orgasms in order to signal fidelity to a male partner, particularly if he is of low-genetic quality. If a female has sex with many partners (employing a polygamous mating strategy) her aim may be to secure benefits from multiple males, such as resources, whilst aiming to only reproduce with males of high genetic quality.

A true orgasm is known to increase the number of sperm carried to the uterus post-male orgasm (suggesting reproductive benefits) and has suggested pair-bonding benefits.

Sex is not limited to intercourse or physical contact; it is anything you do to yourself or someone else does to you that causes you to be sexually aroused. Sexual feeling or urge is natural. As we grow physically and mature the thought of sex and sexual feeling comes upon us naturally. Sexual urge is one of the first signs of maturity in young people.

At a point in all our lives, we begin to sense sexual realities in thought, within us, and towards the opposite sex. It is a mysterious feeling i.e. strange, difficult to understand, and causing curiosity). Ever so often, what we see and hear around us (physical or pictorially) tends to arouse or stir wrong sexual feelings and drive within us. Unlike in the case of beast or animals, “man” tends to have a natural restraining capacity into unhealthy sexual pressure – and that to a large extent brings the consciousness of keeping our sex lives secret.

Having a healthy sex life means knowing what you do and don’t want to do sexually and being able to communicate that to your partners. Your partner should respect your boundaries, and you should respect theirs.