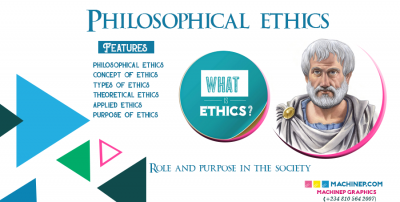 Ethics is commonly defined as the sign that indicates what man has to do in order to be good, that is, worthy of being human. It is a science of what man has to be; this is because moral life is not only doing what in its strict sense but also in being in his entire existence, the ultimate ethical concern is, how should we be? What must we do to realize fully our human personality? This is the fundamental question of philosophical ethics. While other animals are simply trained to adapt, man is different from animals because of ethics, value, and aesthetics (i.e. beauty), this is because man is a valuing animal.

He cherishes, appreciates, wants, desires, and needs certain things. For instance, we value education and pursue it as an intrinsic value, that is, value for its own sake and for instrumental purposes. (intrinsic value is something that has value in itself, for instance, Education- on the other hand, money has an instrumental value). For the material benefits it offers man in terms of social mobility, status, and salary, these things make meaning only to axiology and its component, that is aesthetics, morality, ethics, and their bearing to man.

Ethics is a normative science of human conduct, it tells you what you should do in order to be a good person. A science that gives you norms on what you have to do, it describes the way things ought to be, equating ethics with logic, we can say that it is the science of right conduct. The concept of man reveals that man is a rational animal capable of human desires, emotions, attitudes, and passions.

Philosophers are divided on whether morality is a function of reason or a function of passion. According to Omoregbe 1993, on his contemporary morality, ‘some argue that while it is the function of reason or passion, However, both morality and passions are innate in man, man is the only being that combines both, hence moral sphere is uniquely human, man is, therefore, a harmonious blend of passions and reason, why is it harmonious? Passion is part of man, while not denying it, we cannot allow the passion.

Ethics is the most important and functioning branch of philosophy today. In general, ethics is moral philosophy. The term ethics is derived from Greek term Ethos which means custom or character, hence our human values and virtues. Therefore, our actions and our experiences in everyday life are the subjects of ethics. In other words, ethics is the study of what is wrong and what is right. Good-evil, right- wrong, virtue – vice, justice, and injustice are some ethical concepts. Ethics is divided into two parts: theoretical ethics and applied ethics.

The study of theology helps one to deepen one’s religious outlook, the same applies to Ethics, and the study of ethics helps one to elevate one’s moral standard. The study of ethics should enable us to see the effect in our conduct and other people’s conduct, it helps us to live in a normative way and to understand the exact nature of things, to be able to set things in our conduct and make profitable suggestion to others.

We compared ethics to logic, but it does not follow that the study of logic is a precondition for correct reasoning. Just like the study of Ethics won’t be a reason for not behaving correctly. For philosophers have said that knowledge is virtue and ignorance is vice- Plato, those who err, for ignorance. –Socrates’ ethics as we have seen is a study of human action, it is concerned with what is good as distinct from what is bad, what is duty, and obligation. Right and wrong.

Knowledge helps us to unveil us from the darkness of ignorance, man, as we saw earlier, needs education, this makes him more to live by certainty than by chance, it enables man to control his environment through his interaction to suit his purposes; since man is capable of doing good or bad, he needs to be prepared to do good at all times through education on ethics, this is what makes education a value-laden enterprise because it aims at the betterment of man in order to live better in the society.