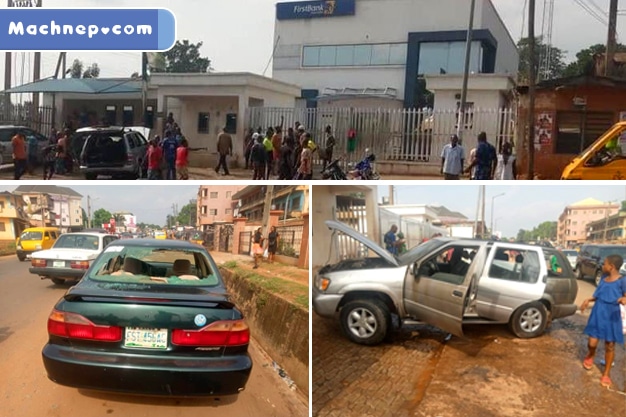 In the middle hours of Thursday, April 15th, 2021, some unknown gunmen attacked Anambra Community and First Bank, with their weapons, and destroyed vehicles and some other valuable properties.

This incident took place just a few hours after Mazi Nnamdi Kanu accused and alleged that the DSS is plotting to sponsor hoodlums and criminals to carry out a dangerous attack on banks while disguising themselves as the Eastern Security Network (ESN) operatives.

Machinep gathered that this is a calculated plot by the Nigerian Government to bring chaos to the societies in the Eastern Parts of Nigeria while attributing the scenario to the Eastern Security Network operatives of Biafra.

The leader of the Indigenous People of Biafra (IPOP), Nnamdi Kanu, on Thursday, declared that the Eastern Security Network, ESN, has no plans to attack banks in the Southeast as their mission is to secure and protect the People of Biafra from the hands of the terrorist government, and not to bring chaos to the communities.

Nnamdi Kanu made the declaration while accusing the Department of State Services, DSS, of plotting to sponsor criminals to carry out such attacks while disguising themselves as ESN operatives.

According to the spokesman of IPOB, Mr. Emma Powerful, Kanu claimed that the propaganda was aimed at blackmailing ESN and tarnishing the image of the security outfit before the world. According to Emma,

We, the global family of the Indigenous People of Biafra (IPOB) ably led by our great and indomitable leader, Mazi Nnamdi Kanu, wish to put banks in Biafra land on notice of a wicked plot by the Nigeria security agencies to harm them.

“Our intelligence unit has uncovered fabricated propaganda by the Department of State Services, DSS, that Eastern Security Network, ESN is planning to attack banks in Biafraland to acquire money to purchase arms. DSS is propelling this wicked propaganda all in a bid to blackmail ESN and IPOB, and dent our global reputation.

“We, therefore, wish to debunk this falsehood and blatant lie from the pit of hell. IPOB and ESN are not criminals, and we have no plans or agenda to touch any institution, particularly banks. We are not looking for money to buy arms because we produce our arms locally and cannot attack or kidnap anybody for ransom. We don’t inflict pains on the people we are fighting for their freedom. DSS must stop this rubbish and engage their time on something more meaningful. This poor script cannot fly.

“IPOB and ESN are very disciplined groups, and we cannot indulge in armed robbery against any individual or group. ESN has never left its mandate which is to defend Biafra land against Fulani terrorists and killer herdsmen.

“They have tried to blame the attacks on security formations in South East on us but now it is obvious that we are innocent of that, they have quickly changed tact in their desperation to blackmail us and find a cheap excuse to declare another special military operation in the zone. Our people should be smart and not buy into their tricks.

“We are waiting for any group of armed robbers who would attempt to attack any bank in Biafraland in an attempt to tarnish the reputation of IPOB and ESN. Such band of criminals and their sponsors will regret their action.”

Again, he raised an alert for the banks and Igbos to be cautious while proposing that they will help to resist the criminals from the attack.

“We will help resist these criminals the DSS is arranging to attack banks in the name of ESN and IPOB,” he said.