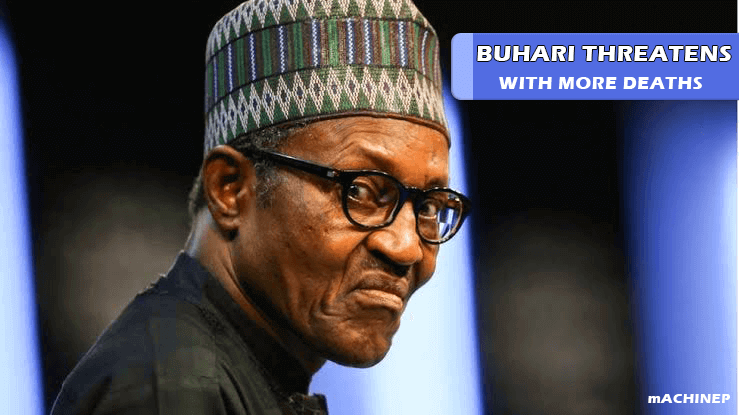 The Nigerian President, Muhammadu Buhari, has allegedly threatened the Nigerian Citizens with more deaths over the current ugly scenario facing the country. Coming from the President’s desk:

“Many of those misbehaving today are too young to be aware of the destruction and loss of lives that occurred during the Nigerian Civil War. Those of us in the fields for 30 months, who went through the war, will treat them in the language they understand”

Following this threat, the citizens seem to have been familiar with the everyday-threat in the country with their comments and reactions.

The threats to the citizens of this country by the President are not the best because we are already facing the threat of insecurity. There supposed to be intelligence reports about those recalcitrant people in our community. We can not use the sin of one person to kill everybody in that community. For example,l am being attacked in my room and a well-known suspect was been encouraged by my landlord and other tenants to be coming into the compound. Are they not supporting terrorism within the compound? Instead of fishing out this suspect to the police, they asked a lawyer to issue me a quit notice to leave the room while they continue to encourage recalcitrant boys on the premises. May God continue to protect his peaceful and obedient children.

Another citizen has bitterly reacted that:

He’s creating more problems for his Government. Humans should not be treated like cows. Nigerians are only asking for good governance and fair treatment, not this lopsided political leadership dominated by a section of the country with reports of mass killings in many parts of the country, particularly in the middle belt States. The Government should be sensitive and civic in its policies, pronouncements, and projects. This is the 21st century and not the stone age.

However, the citizens seem to live in threat for several years now, and so, they tend to see the threats as a reoccurring decimal.

Furthermore, the country seems to be in shambles at the moment with several killings, kidnapping, and a lot more evil practices. At the same time, the Indigenous People of Biafra, IPOB, has continued to peacefully agitate for freedom, even when the Federal government has falsely tagged them terrorists. Also, the Yoruba Oduduwa Nation is also clamoring for their freedom, but the Federal Government doesn’t want to comply because of some selfish interest. However, the struggle continues till further notice.